PALFINGER and Red Bull are two internationally successful Austrian brands who normally only know one direction: forwards. Yet both companies remain aware that looking at things from a new, different angle can lead to exciting results. “Snowboarding Reverse” shows how snowboarder Clemens Millauer turns the concept of recreational winter sports upside down and makes acquaintance with an iconic PALFINGER product in the process. Sometimes “doing things backwards” can have its merits, too.

Things have a certain order. We learn that from a young age. Pioneers, however, re-learn to challenge this order – to think outside the box – later in life. PALFINGER and Red Bull are two prestigious Austrian brands that have always excelled at questioning the present to shape the future. When Red Bull snowboarder Clemens Millauer proposed an idea that challenges the concept of winter sports, the very essence of Austrian leisure culture, it soon became clear that everyone was willing to back the “reversal” of an activity that most people know as a “top to bottom” process. And the result is spectacular.

On a typical winter morning, you might wake up in an Austrian village and gaze out of the window at snow-capped mountains, looking forward to an exciting day on the slopes. You would usually wander over to the valley station, strap on your skis or snowboard, and spend the day gliding down the trails. That is the order most of us have become accustomed to. But where’s the fun in doing things normally? Millauer, a slopestyle and big air professional, asked Red Bull for backing to explore the “reverse” for an exciting feature video. And because it’s always more fun with a partner, PALFINGER was invited to participate.

The ongoing cooperation between PALFINGER and Red Bull is clearly turning into a prosperous partnership. Two internationally successful companies with such different target groups have plenty to offer each other. This was proven by our first collaboration for the Red Bull Flugtag earlier this year. We are proud to contribute to Red Bull’s lifestyle brand environment, which, in turn, offers us access to a vast, new audience. This video project was yet another opportunity to prove how much value two brands can create together.

So, while others are slowly trundling up the mountain in cable cars or chairlifts in Flachauwinkl on a sunny 1st of April 2021, Millauer hears the sound of an approaching helicopter that is about to pull him up the mountain, through a half pipe, and over a massive kicker at breakneck speed. Red Bull wouldn’t be Red Bull, however, if it didn’t add a bit of extra excitement to the mix. During a brief switch to being towed by a snow mobile, Millauer encounters a PALFINGER EPSILON forwarder crane, one of our iconic products developed for the forestry industry, in its natural habitat: the forest. Millauer happens upon our crane while it is lifting tree trunks and matches its technique and grace by clearing the piece of machinery with a spectacular jump below the boom. Wow, what an image!

But this is something you really need to see for yourself. We hope you enjoy the video as much we do. And hey, don’t be afraid to think outside the box from time to time. 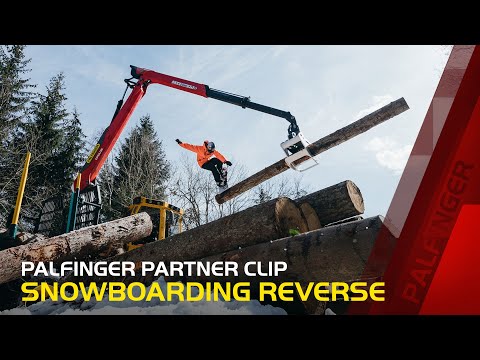